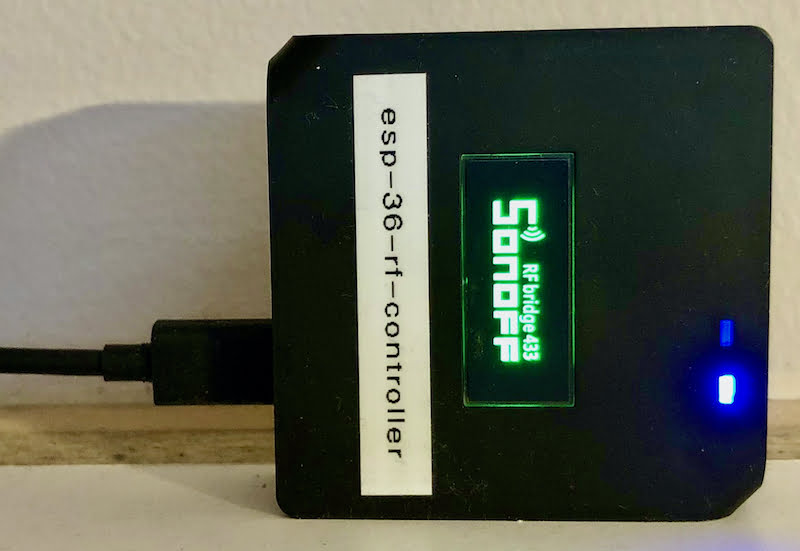 When we bought a new Brilliant Bahama ceiling fan for the living room recently, style was deemed more important than an easy home automation integration. The fan came with an RF remote control , so I thought to give the RF route a go to integrate this ceiling fan into Home Assistant for local control.

Looking for an RF bridge quickly led me to the quite reasonably priced Sonoff 433 RF Bridge. It’s a small device powered by a USB cable that you can easily hide on a shelf or cupboard.

There are a couple of options flashing alternative firmwares like Tasmota or ESPurna onto the device. However, all these options require making some hardware changes (Clarification: ESPurna only requires hardware modifications if you want support for additional protocols.)

Luckily ESPHome recently added support for the Sonoff RF Bridge into its development version and this does not even require any hardware modifications. ESPHome is my preferred custom firmware option due to its great integration in Home Assistant and general ease of use.

I am not aware if there would have been an option to flash OTA out of the box, but instead I used a serial connection. I know I just said that no hardware modifications would be required and now I am going to solder some pin headers onto the board, but compared with the hardware modifications required for Tasmota or ESPurna to work, the pin header is a rather simple change. You may even be able to get away with just temporarily holding cables to the board or sticky-taping them on. The connection is really just required for a couple of minutes.

Access to the device’s hardware is quite easy. After opening the case it turned out that I had the R2 version 1.0 board. You only have to bend the large LED out of the way to be able to solder on some pins for the serial connection. There is a switch on the board that you will need to switch to ON to get the device into flash mode, and turn OFF after flashing to boot into normal mode.

I decided to use right angle pin headers, soldered from the top and sticking out at the bottom. That way I could just keep them on board and they just fit in the box.

At the time of writing this post, the development version of ESPHome contains a bug that prevents any codes to be transmitted through the RF Bridge. Special thanks to user JeeCeetje on the Home Assistant community forum for finding this issue and providing a fix!

To apply that fix:

Just to make sure that this code is actually baked into your new firmware, I would recommend cleaning your build directory (esphome your_config.yaml clean) before generating and uploading the new firmware.

For the serial connection I use a standard FTDI adapter connected via USB to my MacBook, and after connecting this serial adapter to the pins on the RF Bridge, it’s available as a device in macOS, and recognised by the ESPHome command line tool.

The following is my full ESPHome configuration for the Sonoff RF Bridge. It’s primarily based on the sample code provided, complemented by the standard sensors I add to monitor my devices.

After flashing the RF Bridge and adding the device to Home Assistant, you should find 2 new service you can use.

The esphome.esp_rf_bridge_send_code service will later play an important role when defining scripts that send RF codes to the fan.

The RF Bridge integration doco mentions the learn mode that you would need to put your bridge into to actually capture new codes. However, I am pretty sure that my bridge started logging codes it received without activating that learn mode.

You probably already know that you can connect to your ESPHome device remotely and view its logs from the command line (esphome your_config.yaml logs) and you should then see log entries like the following when pressing a button on the remote control:

I decided to focus on the important buttons for now. I skipped the buttons to activate a timer because Home Assistant allows me to have much more fine-granular control, as well as the buttons to control a light because this particular ceiling fan does not have a light attached.

Each log entry consists of 4 data points – sync, low, high and code. The key here is the code bit, while the other three values vary a little bit with each button press.

Please note that each value is an integer in hexadecimal format. We will have to keep that in mind when using these values later on to control devices.

We are going to create a template fan and we need to keep track of its state with an input_boolean for the state and an input_select for the speed.

Scripts to turn the fan on and off

I implemented two scripts that turn the fan on or off. As you can see this is where the connection to the RF Bridge comes back into play. The fan_living_room_on script takes care of the sending the correct speed code to the fan, depending on what is currently selected in the input_select defined above, and turns the input_boolean on.

Please note that there are two options to define the codes here: I decided to keep the actual hexadecimal value in the code which requires that awkward syntax to keep it as an integer value (otherwise it would be interpreted as a string). The alternative is to convert from hexadecimal to decimal numbers, so for example you could replace {{ '0xADAF05' | int(0,16) }} with 11382533, if you prefer that syntax.

Script fan_living_room_off is much simpler end just sends the code to turn the fan off, and turns the input_boolean off.

The following fan definition basically just ties all the above into a single entity.

As expected a fan entity is now available in Home Assistant that lets me turn the fan on and off and select the speed I want.

The RF Bridge is now about 4 metres away from the ceiling fan, and I have also put it about 12 metres away for a couple of days. All commands were received and transmitted successfully as far as I can tell.

Automations for the Living Room

Thanks to the above prep work you can use the standard fan.turn_on and fan.turn_off services to control the fan.

I have not yet decided how to automate this ceiling fan in summer. During the day it could just be manually turned on and off. In the evenings I could tie the fan to the lights, a motion sensor and the TV.

There are two thing that the integration based on RF codes does not provide: The fan does not give any feedback (other than a loud beep) to the RF Bridge to confirm that the command has been received successfully. And, when you use the supplied RF remote control to control the fan, state changes are not reflected in Home Assistant. The latter could possibly be implemented by adding an automation that listens for events coming from the RF Bridge and then changes the fan entity. The tricky part however is how to then avoid having Home Assistant again trigger the fan to make that state change. In other words, the above scripts and template fan need to be able to distinguish how the state change was triggered.

In a way the state shown in Home Assistant is an optimistic one. But as long as you are going to primarily control the fan through Home Assistant, e.g. through automations, the UI or a connected smart speaker, and you are nearby to see if the command has actually worked, this integration based on the Sonoff RF Bridge is a valuable addition to the smart home.

Just a small clarification: User 1technophile on the Home Assistant community forum pointed out that using ESPurna firmware does not actually require hardware modifications right from the outset. Only if you want to support additional protocols then some modifications are required.

In the meantime I have updated my RF Bridge to the current stable ESPHome version 1.15.3. And I have implemented two automations that listen to events triggered by using the RF remote control.

The following sample automations work with my fan controller and remote and the entity names I used above.

The following automation listens to any events coming from the RF Bridge and filters by the “FAN ON” and “FAN OFF” events. Depending on which code is received the corresponding service to turn the input_boolean on or off is chosen.

Similar to the automation above, this one filters by the 5 fan speed codes, and then simply sets the input_select to the correct speed value.