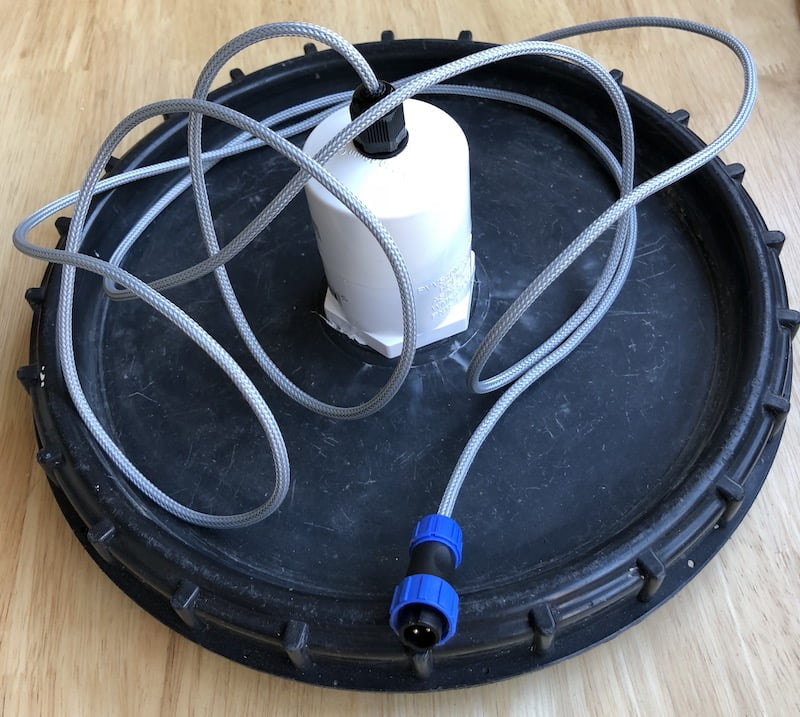 My pool requires a regular influx of liquid chlorine that is stored in a large drum next to the automated chlorinator. Every couple of weeks I have to replenish that drum, otherwise the chlorine concentration in the pool water gets too low, and algae starts growing resulting in green-ish pool water. Needless to say, this has already happened a couple of times in the past and each time I had to pour in more chemicals to clean up the mess and wait a few days until the water was clean again.

A simple solution to this problem may have been to just put a reminder into my calendar to go down to the pool every other week or so, and manually check the level of liquid chlorine in the drum and refill if necessary. But why not throw technology at this and try to measure the actual level of liquid chlorine left in the drum, and then send myself a notification when the drum runs empty?

The main challenge for measuring the liquid chlorine level is that it is a highly corrosive acid. I looked at this good summary describing various methods of measuring fluid levels. I pretty much discarded all methods that would require a sensor to be in contact with the fluid – too many sensors are made of metal or unknown types of plastic which would not survive the direct contact with the liquid chlorine very long. Out of the contact-less methods, I picked the ultrasonic sensor because it appeared to be a good compromise of promising to be up for the job and affordability. The alternatives would have been laser or radar based, but I could not find a simple and affordable sensor in a ready-to-go format.
I ended up buying a waterproof ultrasonic sensor which is somewhat encapsulated, but comes with the disadvantage of a ~25cm blind zone. My drum is about 60cm high, and since I am primarily interested in getting a notification if the drum is nearly empty, the blind zone was acceptable.

This article describes another extension to the device that I had previously connected a temperature sensor and water level switches to.  The breadboard view below is just showing the basic connectivity; in reality I mounted all the bits onto a prototype PCB.

The ultrasonic sensor I use is a JSN-SR04T which actually comes in two parts – a small PCB with connectors to power and control the sensor, and the actual sensor on a long cable connecting into the PCB.

The JSN-SR04T operates at 5V which the WEMOS D1 mini Pro luckily provides. The trigger works fine on a regular digital pin, but the echo must go through a voltage divider.

The sensor is added as a “P013 – Ultrasonic Sensor – HC-SR04” device which requires both pins to be configured – “1st GPIO” refers to the trigger pin, and “2nd GPIO” to the echo pin – and since I want to measure the distance I selected the mode “Value”.

Since I already anticipated that some calculations had to be done in Home Assistant, I decided to just publish the measured distance value via MQTT, and called the sensor “liquidchlorinerawvalue”.

The delay of 30 seconds was my initial configuration, but have increased it to 60 seconds in the meantime.

As usual I got most parts of the enclosure for the sensor from my local hardware store.

The ultrasonic sensor is mounted into a 32mm pressure pipe cap.

For the sensor’s cable I mounted a cable gland into a 40mm pressure pipe cap.

The previously assembled bottom cap with the sensor just fits into a 40mm x 1½” valve socket. The bottom cap still sticks out a couple of millimetres for the top cap to fit over it.

Assembling the parts now makes a more or less waterproof enclosure with the ultrasonic sensor facing downwards, and its cable coming out of the top.

I then drilled a 38mm (or 1½”) hole into the lid of the drum. A rubber washer between the enclosure and the lid is used to prevent rain water from the surface of the lid to get into the drum.

The cheapest option to fix the enclosure to the lid was to saw off the top of a 1½” BSP pipe cap and screw it onto the thread of the enclosure from the bottom of the lid.

And this is how the fully assembled enclosure looks like with braided sleeving for the cable and a waterproof plug on the end.

Configuring the sensor in Home Assistant

Setting up the sensor

The following MQTT sensor definition just picks up the raw distance value in centimetres from the ultrasonic sensor.

After running the sensor for a while I soon realised that the values fluctuate quite a bit – even when the chlorinator was not running. Hence I wrapped the distance value into a statistics sensor with a high sampling size in an attempt to smoothen the values reported over time and avoid outliers that may eventually trigger false alerts.
The template sensor is then retrieving the mean value from the statistics sensor and turns it into a percentage value. The drum I have is 60cm high and has a volume of 60 litres. To keep things simple, the maths in the value template is assuming that the drum is a perfectly shaped cylinder, and for the purpose of this sensor that should be good enough.

With the introduction of the new filter sensor in Home Assistant 0.65 I may revisit this setup to replace the statistics sensor with a suitable filter sensor configuration.

Displaying the percentage value in the UI

Finally, the sensors storing intermediate values can be hidden, and the template sensor gets a nice icon.

Displaying the liquid chlorine level in percentage is as straightforward as you would expect.

Now, the most important part is sending an alert if the drum needs to be refilled. The following automation sends an alert via Pushover if the liquid chlorine level falls under 15% for 1 hour.

The sensor is now running for a few weeks and while it is working fine in general, its accuracy is actually below expectations. The distance values measured by the ultrasonic sensor fluctuate a lot even though the actual level of liquid chlorine in the drum does not change.

The following sample graph shows the percentage values plotted out over a day. Over night the value almost does not change. The pool pump and chlorinator started at around 8am and that is when some small fluctuations can be observed. At about 11am I topped up the drum and the graph clearly shows that event. But shortly after that the values go up and down much more than expected.

The effect becomes even more apparent due to how Home Assistant compresses the y-axis based on the maximum range of values across a day.

I explored a few things that may contribute to the fluctuating values:

I have recently found a turbidity sensor that I am planning to build into the pool. This could help to either identify when the pool filter may need to be cleaned, or alert me if the pool water is in the process of turning green (again).

This website uses cookies to improve your experience while you navigate through the website. Out of these, the cookies that are categorized as necessary are stored on your browser as they are essential for the working of basic functionalities of the website. We also use third-party cookies that help us analyze and understand how you use this website. These cookies will be stored in your browser only with your consent. You also have the option to opt-out of these cookies. But opting out of some of these cookies may affect your browsing experience.
Necessary Always Enabled

Any cookies that may not be particularly necessary for the website to function and is used specifically to collect user personal data via analytics, ads, other embedded contents are termed as non-necessary cookies. It is mandatory to procure user consent prior to running these cookies on your website.