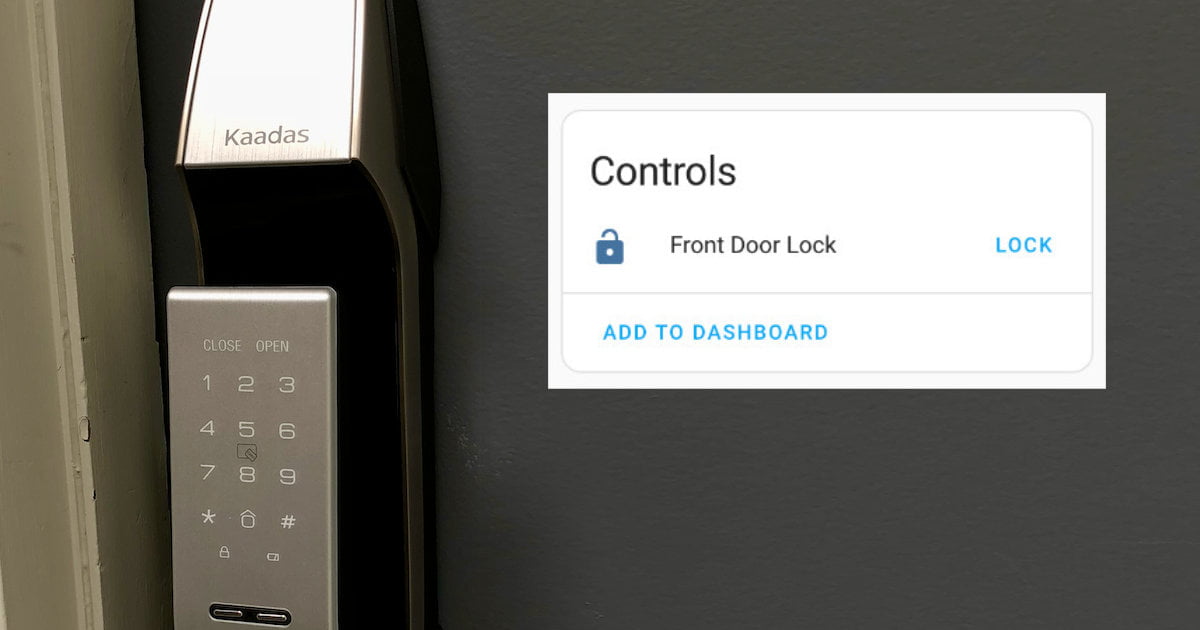 Four years ago I bought a Kaadas K8 smart lock and now I am replacing it with one from a different manufacturer. The following review is based on my own experience with the lock and somewhat anecdotal, and I hope it helps others when going on the journey to find and assess a suitable smart door lock.

The Kaadas K8 is a push pull lock, it is very large and heavy and feels very solid. The package came with all the parts needed, but some screws needed cutting because they’re made for different door widths.

The door lock is advertised as keyless which effectively refers to the various options that don’t require a physical key – fingerprint recognition, NFC card or PIN. However, the lock actually does come with emergency keys that can open the lock even when the batteries ran out. It uses 4x AA batteries that need regular replacement.

I ordered the lock with a Z-Wave module (the alternative was a Bluetooth module) to integrate it into Home Assistant, but unfortunately the module wasn’t available for another 12 months or so.

The total price for the lock including the Z-Wave module was about AU$750.

The manufacturer Kaadas is based in China, and their Australian distributor was based in Sydney’s west.

I installed this lock myself onto an existing timber front door. It took me several hours removing the 20+ year old previous lock, drilling holes, cutting out the space needed for mortice and striking plate, installing the new lock and fine-tuning it until it was fully operational. I would not necessarily recommend doing this yourself if you don’t have the time, the tools and the patience for this kind of work.

The lock is IP45 rated but our front door is not fully exposed to rain. It can get quite hot in the afternoon when the sun shines onto the front door – not sure if that has affected the performance of the lock or not.

The fingerprint sensor is actually located on the back of the keypad. Initially it takes a bit of trial-and-error to always find the sensor with your finger and there is some haptic feedback that helps.

Once the Z-Wave module arrived, it was easy to install it on the back of the lock into the battery compartment.

I added it securely via Z-Wave JS where it showed up with lots of diagnostics information. And the Home Assistant integration worked as well and brought up a lock entity. However, the entity itself and the sensors haven’t been all that useful. I have never been able to reliably control the lock remotely, and the battery sensor was never even close to accurate.

About 6 months after the installation the lock occasionally made strange beeping and chirping noises. The noises came and go at random times, but more often a few minutes after the door was closed. Sometimes the noise disappeared after about 10-20 seconds, but other times the only way to make the noise go away was to open and close the door a couple of more times. The lock itself was still working fine and the speakers were working fine as well, and at first this looked more like a little annoyance. However, my concern at the time was that this noise may indicate a long-term issue or drain the batteries faster.

After another week of remote trouble-shooting the vendor came out to our home and replaced a circuit board under warranty. This fixed the issue.

A little over 2 years after the installation of the lock, we experienced another major issue where after closing the door, the keypad lights up and the lock keeps making a “ding-dong” sound, and this repeats every 5 seconds. And while the lock was in that state it was almost impossible to open the door, regardless of whether we tried fingerprint or the key fob. The only way to stop this that we could find was to somehow manage to get in, i.e. after many attempts of timing the key fob entry just right, and then remove the batteries on the inside. This issue started occurring multiple times a day.

I contacted the vendor again to find a solution, and after liasing with the manufacturer they offered to replace the faulty part and just charge a call-out fee (AU$120). Given that the lock was out of warranty at that time this was a reasonable deal, and replacing the part did fix this issue.

This next issue was not a single issue but the lock started showing some erratic behaviour which became more and more annoying over time. For example, occasionally the voice response was repeating 4-5 times, for example after closing the door the lock said “Door closed” multiple times in a row.

No response and no support

And finally, more recently we have had a major issue with this lock where it completely locked us out: The lock still appeared operational, and authentication with fingerprint or NFC card still appeared to work fine, the lock simply wouldn’t open. This happened at random times, usually weeks apart, but consistently for a period of time until someone had to open the door from the inside to reset the lock.

By now the door lock was long out of warranty, and the vendor and local distributor of this brand seems to have disappeared from Australia.

This last issue was the final straw the led us to replace the door lock altogether.

My overall verdict for this Kaadas K8 door lock is that it was not a good product and has not provided the user experience we were hoping for. It worked well initially, but over the years we have had multiple smaller and larger issues with this lock where vendor support and replacement of parts was required. The remote functionality has not actually worked as expected, and I was never able to implement more advanced automations with the door lock. It appears as if the Australian distributor has disappeared, and the Chinese manufacturer is now servicing all regions. I don’t know if spare parts were available for this lock if I needed any in the future.

The fustration with the issues grew to a point where we decided to replace the lock altogether. Stay tuned for more on this in a future post.