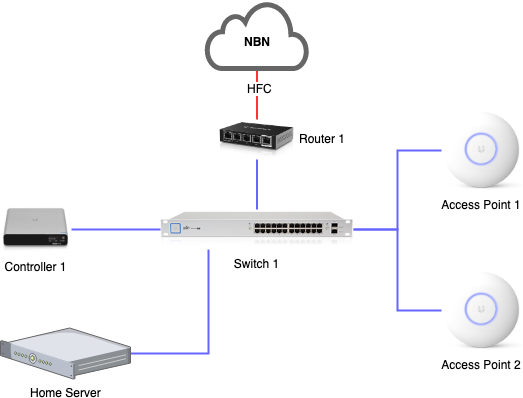 In the following article I will provide a high-level overview of my network design, some details on the physical network devices I picked, and a few more implementation details.

Over the years my network has grown significantly and I typically had some flavour of integrated WiFi router until that broke or until the manufacturer was not supporting it anymore.

And over the last couple of years my requirements have changed: More family members own more devices that need Internet access. We moved into a larger house that allowed me to install structured cabling and which required broader WiFi coverage for more devices especially in the IoT space. I have deployed home-made IoT devices all over the house, in the garage, on the roof and even behind the pool.

Before I explain the logical and physical setup of the network, let’s have a quick look at what is driving the design decisions:

I currently have a single broadband Internet connection. This has long been cable broadband, and I have just been connected to the NBN where this is called HFC (hybrid fibre coaxial).

Over the last 2 years my previous ISP (Optus) had seemingly neglected their cable network, and we had several outages per year, always unannounced and unexpected and usually took hours to restore.

I briefly investigated having a backup Internet access solution through wireless broadband: This would require for example a 4G device such as Netgear’s LB2120 and a data SIM card/plan; the router would then need to be configured to monitor the primary Internet connection, and automatically fail over to the alternative connection if the primary connection is down for more than 3-5 minutes. The investment into the wireless modem and a data plan is hard to justify, and I will observe the performance of the new NBN based broadband connection before I revisit this topic. In principle though the router I selected does support such a setup.

I decided to segregate my home network into several VLANs.

My WiFi access points support multiple SSIDs, and each SSID can be associated with a particular VLAN. I configured three different SSIDs – private, things and guest. The actual SSIDs are different to make sure they are unique in my neighbourhood.

Please note: All devices described below come from the same manufacturer. I bought all devices myself and have used them in my home for 12+ months (except for the CloudKey which I only added about 4 months ago).

I decided to go with an EdgeRouter X which comes with 5 Ethernet ports. The first port is my WAN port – connected to a cable modem -, and the 4 remaining ports are aggregated into a virtual switch. Each VLAN added to that switch is represented as a separate network interface with its own IP address.

Before I bought a PoE switch I temporarily had 1 WiFi access point directly connected to the router – one of its 5 ports supports PoE.

The router comes with a web-based user interface for the essential stuff, but also allows for command line access via SSH which then provides access to the full configuration.

I configured a DHCP server for each VLAN that hands out IP addresses. Also, the built-in DNS server listens on each network interface and forwards any DNS queries to the ISP’s DNS servers. This allows me to additionally define some internal hostnames (mainly my home server) that are resolved locally on the router.

I make extensive use of the built-in firewall to control access from and to the Internet, as well as between my VLANs. More on this below.

My switch – a UniFi US-24-250W – is a 24-port managed PoE+ Gigabit switch. The first port of the switch is configured as a trunk and connected to one of the LAN ports of the router.

Wherever possible I try to connect as many devices via Ethernet instead of Wifi. The main reason is a steadily growing number of Wifi-only devices, and more Ethernet connected devices lower the risk of Wifi congestion.

I deployed two UniFi UAP-AC-PRO access points to provide good coverage in all areas of my house, garage and garden. The access points are connected to the switch via Ethernet and powered via PoE. The solution provides seamless roaming between the access points which is quite nice when walking around with mobile devices.

UniFi Controller is Ubiquiti’s attempt at a software-defined network (SDN). The idea is to use a central controller that provides access to all configuration options that the network devices support, and the devices are provisioned according to the configuration changes made.

On the video recording side all video streams from all cameras are recorded 24/7 and the UniFi Protect app then shows a timeline view indicating when motion was detected. The device manages local hard drive space and deletes old content automatically.

A little drawback of UniFi Protect is that the Cloud Key device does not support VLANs and only has a single network interface. Having UniFi Controller on the management VLAN is fine, but being forced to have UniFi Protect on the same VLAN means that the video cameras must be able to connect into the management VLAN. A clever firewall rules helps, but this setup is not ideal.

There are apps for both UniFi Controller and UniFi Protect, and these do not only work at home when connected to WiFi, but also remotely (if enabled) via the manufacturer’s cloud based forwarding service. You have to decide if you need this and want to trust the manufacturer, but I am occasionally using remote access and it is quite reliable and convenient. The UniFi Controller app is also quite useful if you just want to quickly activate a switch port or check the port status without carrying around a laptop.

What I did not know when I started buying Ubiquiti’s products was that the EdgeMax product line that the EdgeRouter X belongs to is separate from the UniFi product line that my access point, switch and surveillance cameras belong to. That means that the Cloud Key controller can’t manage the EdgeRouter X and also can’t show any information relating to Internet access. So far this is more of a small inconvenience and requires a bit of double-handling of configuration, such as VLANs.

As usual, my ISP only gives me a single public IPv4 address, and I am using NAT on the router and multiple private subnets in my home network.

I decided to pay $5 extra per month to get a static IP address. This allows me to connect to devices on my home network via SSH/HTTPS or VPN. And it also makes the setup easier because I can configure a static DNS entry to reach home instead of using a dynamic DNS service to deal with changing public IP addresses.

I have mapped one subnet per VLAN from the 192.168.x.x pool. For simplicity I use the VLAN ID as the third octet of a class C subnet.

I will focus on IPv4 for now. My journey with IPv6 has just started and will be the topic of another article.

At the moment I have implemented the following access rules:

I am forwarding the following two ports:

The router automatically creates firewall rules to allow traffic to these ports come through. On my home server I run a separate firewall, and I installed fail2ban which automatically bans IP addresses for a period of time if malicious behaviour is detected.

The EdgeRouter X has a built-in VPN and I configured it as an L2TP server. Laptop and smartphone support this out-of-the-box, and once connected the devices are joined to my private VLAN – like they would if I was at home.

Despite the fact that my router supports DNS forwarding to my ISP’s DNS servers, and all my local devices are supposed to use my local DNS server, there are some devices that have an alternative DNS server hard-coded. An example of this behaviour is the Netflix app on my Android TV which uses Google’s DNS server directly.

A NAT destination rule has been configured that redirects all requests to port 53 to my local DNS server. I had to duplicate this rule for each VLAN.

In the next part of this series I will provide a brief overview of my home server.